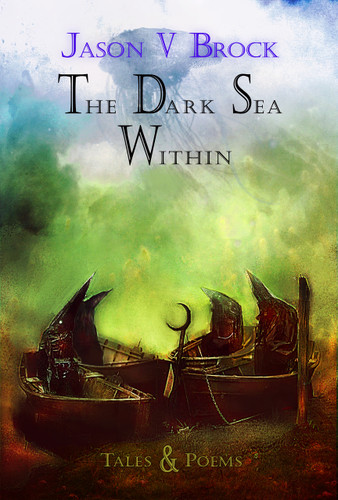 "Brock (Disorders of Magnitude) displays both imagination and superior writing ability in this collection of 20 short stories and poems... The range of his work is impressive..."

**ORDER FROM THE PUBLISHER BY CLICKING HERE

This much-anticipated second collection by Jason V Brock fulfills the promise of his successful first volume, Simulacrum and Other Possible Realities (2013). In pieces long and short, Brock uses weirdness, fantasy, and science fiction to probe deeply into the tortuous complexities of the human condition in the face of an indifferent or malignant universe.

Such works as “Brood,” “The Shadow of Heaven,” and the title story draw upon the cosmic terror of H. P. Lovecraft, while “Transposition” adapts themes from Robert W. Chambers’s The King in Yellow in a story of medical horror. The grimness of war is the focus of “Memento Mori,” and the inexplicable power of dreams is highlighted in “A Darke Phantastique.”

This volume also features an unpublished, richly textured two-part post-apocalyptic novella, “Epistles from Dis”—a nightmarish epic that carries the reader along from beginning to end in appalled fascination. Included here are a brace of Brock’s provocative and transgressive poems, ranging from the Miltonic “Fallen: A Lament and Affirmation” to the poem cycle “Out of Their Heads,” a paean to decapitation in homage to Edgar Lee Masters (Spoon River Anthology).

All in all, The Dark Sea Within presents a smorgasbord of dread that places the author among the leading voices of contemporary weird and horror fiction.

“Make no mistake, this is no Lovecraft knockoff; stories revealed here are original and scientifically plausible. Jason V Brock’s writing is crisp, precise, and easily accessible; the plotting sharp and compelling; and once the action starts it is non-stop, the reader only able to catch their breath at the very conclusion. . . be sure to watch for more exciting, literate stories to come. Highly recommended.”

“. . .full of storytelling energy. You are bound to like this one.”

“[Brock] takes characters and situations into places I would never have thought of. . .”

“[Tales such as “The Man with the Horn”] demonstrate that there are still new ways to generate chills. . . And new ways to suggest otherworldliness typographically.”

“[Jason V Brock] is a remarkable fellow and an awesome talent.”

“Brock’s literary experimentalism is what can only be called refreshingly uncanny—if you as a reader can take it. . . . a must-have for every weird fiction, horror fiction, or whatever-indefinable fiction collection you may have on your bookshelves. . . . When all is said and done, his work speaks for itself and defines him in one word: Outlier.”

“Brock, already an accomplished editor, anthologist, and filmmaker, is quite a good writer. He has that essential skill, the ability to write page-turning prose. . . [and] an impressive range. . .”

“Brock deals with questions of death and mortality (with a few glances at immortality), of consequence, of choice, of the nature of identity itself. He does not hesitate to incorporate politics, morality, and social causes into the fabric of the stories, but in each instance, what might be merely an authorial intrusion becomes welded to the story itself. . .”

“Jason V Brock is a lover and writer of strange tales that incorporate Gothic lit, sci-fi, and horror. There are a number of very useful labels, including weird fiction and dark fantasy. Or as. . . writer George Clayton Johnson simply called it, this is work with ‘a touch of strange.’ What you will find in this collection is an ambitious vision that harks back to any number of writers: Charles Beaumont, Richard Matheson, Rod Serling, Ray Bradbury, Johnson, William F. Nolan, and John Collier, to name a few.”

“Jason V Brock has a head full of worlds and, fortunately for us, the talent to capture them on the page. You have the chance to encounter some of those worlds in this artful collection.”

**ORDER FROM THE PUBLISHER BY CLICKING HERE