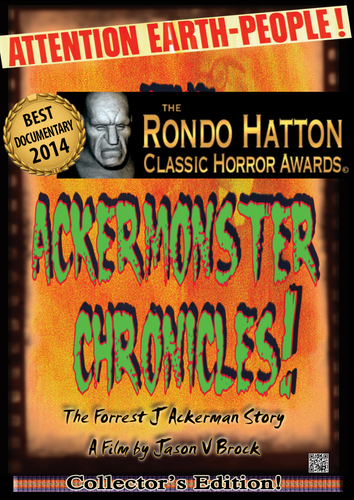 Thanks to all who voted!

Freaks! Mutants! A world gone mad! The title says it all!

Nudism. Esperanto. King Kong. "Sci-Fi". What do all of these things have in common? Simple: Forrest J Ackerman.

Glad you asked. Forrest J Ackerman (RIP) was an agent, a notorious, serial bit player, and an honorary lesbian. Known the world over as "Uncle Forry", "EEEE", "4SJ", "Dr. Acula", and numerous other pseudonyms (a few none too kind), Mr. Ackerman was perhaps best known as the original editor of Famous Monsters of Filmland magazine, the creator of Vampirella, and all-around mega-fan!

So what!? Well you should know that many of  the things you love and the people you admire  (for the most part!) think of Forry as a treasure trove of knowledge and enthusiasm! Be it horror, science fiction, fantasy, or just generally being naked, he has been there, done that, seen it done or turned away from it!!

His clients were a who's who of genre delights: Charles Beaumont, A. E. Van Vogt, William F. Nolan, Curt Siodmak, and L. Ron Hubbard to mention but a few. His friends span the chasm of the twentieth century and beyond, be they slobbering sci-fi neophytes, or the likes of  Ray Harryhausen, Ray Bradbury, and John Landis. Forry is embedded in the culture of film, fantasy and science fiction! A self-made fan, he has been an institution and fixture living in various incarnations of his own personal museum, the AckerMansion in Hollyweird, Karloffornia for almost a century... Like Dracula, the Mummy and Frankenstein's Monster, he lives on...