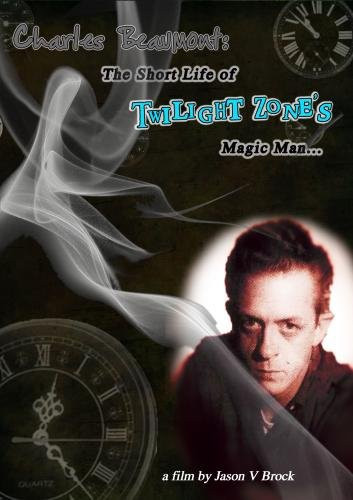 All of these words apply to one man: Charles Beaumont.

As one of the principal writers for the original Twilight Zone series, Beaumont became a mainstay of 1960s television. Later, working with filmmaker Roger Corman, he embarked on a promising career in movies (7 Faces of Dr. Lao, The Intruder). By this time, Beaumont was also a primary contributor to Playboy, Esquire, and several other major magazines of the day.

Beaumont overcame humble roots, bouncing between Chicago and Washington state. As the only child of an obsessed mother with an explosive temper, he endured many hardships, such as seeing his pets tortured and being dressed as a girl. Plagued with health problems and very fragile, Beaumont was a prodigious young talent whose artistic and writing abilities surpassed his peers.

Following his dreams to Los Angeles, the driven, intellectual Beaumont became the charismatic nucleus of a group of Southern California writers, whose ranks include Richard Matheson, William F. Nolan, George Clayton Johnson, Harlan Ellison, and Ray Bradbury among others. Charles Beaumont's intensity and unabashed heed to confront controversy influenced early television and science fiction; he understood the human condition, and lived at the edge in everything he did and created.

At the height of his career, Beaumont began exhibiting strange and frightening symptoms: slurring words, balance problems, memory lapses. Was it alcohol abuse? Was it leftover from his childhood bout of meningitis? Perhaps it was stress...

He began to age - looking more like a man of 70 than a young man in his thirties. Charles Beaumont seemed to be trapped in one of his own Twilight Zone stories.

Whatever the cause, he would not live to see his 39th birthday.

Podcast interview by Tom Elliot with the director, Jason V Brock, and his editor/wife, Sunni K Brock, on THE TWILIGHT ZONE NETWORK:

Podcast interview with the director, Jason V Brock, in the context of the 2017 Presidential Inauguration contrasting Trump's rise to power with the protagonist (played by William Shatner) of Roger Corman's Beaumont-scripted 1962 masterpiece, The Intruder:

Charles Beaumont: Short Life of Twilight Zone's Magic Man -- 10 minute Preview HQ (10:31)
**ORDER HERE: http://www.jasunnistore.com/beaumont This is a clip from our Charles Beaumont (he was one of the principle writers for the original Twilight Zone series) film released in Dec 2009. The finished film is 2 hours long, and features a huge number of interviews (Ray Bradbury, John Shirley, Richard Matheson, William F. Nolan, George Clayton Johnson, William Shatner, Roger Corman, Roger Anker, S.T. Joshi, and about 12 others) with people that were influenced by or worked with Beaumont.