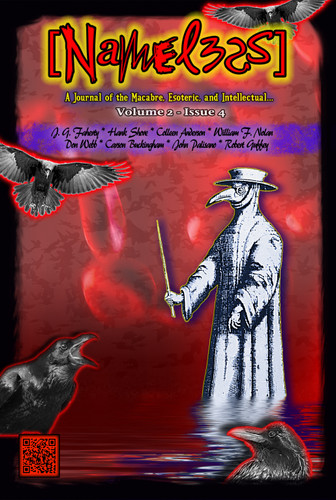 “Feed the Plow” by JG Faherty

“She Paddles the Impossible Canoe” by Geoffrey W. Cole

“The Advertising Man” by Robert Guffey

“Of the Dead: A Brief Look at the Zombie Films of George A. Romero” by Joseph Rubas

“The Martian Bell” by Darrell Schweitzer

“The Muse Is a Harsh Mistress” by Manny Frishberg

“CORPSeX: A Method of Love” by Vincent Daemon

“Covenant of Wolves and Swine” by Steven Saus

“To the Editors” by Stephen Persing

“A Blast from the Past” by William F. Nolan

“The Garden” by Erinn L. Kemper

“Our Lady of Redemption” by Colleen Anderson

“Cosmicomics: On the Other Side of Surreal” by Don Webb