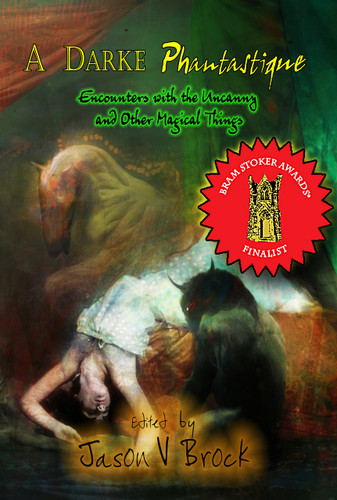 **2014 Bram Stoker Awards® Finalist for Superior Achievement in an Anthology.**

"This is one of those few anthologies that captures the pulse of its time... I can easily imagine new generations of readers opening A Darke Phantastique: Encounters with the Uncanny and Other Magical Things, becoming entranced initially by the artistry of the book, then progressing into the stories themselves and discovering new ways of looking at a new century of darkness… and new tales to explore it."

"If you've been waiting for a brick-sized anthology of fresh horror, SF, fantasy, and magical realism, you're in luck. [A] solid collection..."

"The excellence of this important contribution to genre literature CANNOT be overstated... A masterwork."

A Darke Phantastique--Encounters with the Uncanny and Other Magical Things…

An incredible new anthology of all unpublished or new horror and science fiction, poetry, and scripts that collide with Magical Realism; this volume will break new ground with its take on the literature of the fantastic.

First there was DANGEROUS VISIONS... Then DARK FORCES... Now there is A DARKE PHANTASTIQUE...

At over 700 pages, A DARKE PHANTASTIQUE: ENCOUNTERS WITH THE UNCANNY AND OTHER MAGICAL THINGS... is truly breaking some new ground with its take on the literature of the fantastic.

Features poetry, artwork, fiction, scripts, and nonfiction by the greatest collection of writers in decades, this astonishing book will be issued as a smyth-sewn hardcover with textured endpapers and foil-stamped cover with dust jacket in two fine editions from CYCATRIX PRESS:

PLEASE NOTE: Due to her sudden death, author Melanie Tem was unable to sign this edition; join us as we express our sincere condolences to her husband Steve Rasnic Tem in this great loss to their family, and to the writing community.

Foreword: "The Beginnings of Imagination" (unpublished) by Ray Bradbury

Here are the Contents (FINAL ORDER):

The Beginnings of Imagination

An Abiding Darkness, A Phantastique Light

Charles Out of La-La Land

The Wisest Stone and the Zoo

Out of the Blue, and Into the Black

Birth of an Apocalypse

La Joie de Vivre, or Picasso and the Satyr

“In Your Dark”: Differing Strategies in Subhuman Integration

Transformations at the Inn of the Golden Pheasant

Dust Made of Words

by Gary A. Braunbeck

Paper and Pencil, Skin and Ink

The Case of the Four-Acre Haunt

“You’ll Reach There in Time”

by Lucy A. Snyder

I Keep the Dark That is Your Pain

The Fine Art of Courage

Phoenix on the Orange River

ADVANCE READING COPY Preview of A DARKE PHANTASTIQUE (03:27)
A landmark new anthology from Cycatrix Press which combines Horror and Magical Realism! Get it here: http://www.jasunnistore.com/products.php?product=Darke-Phantastique-%252d-Trade-Edition-Only