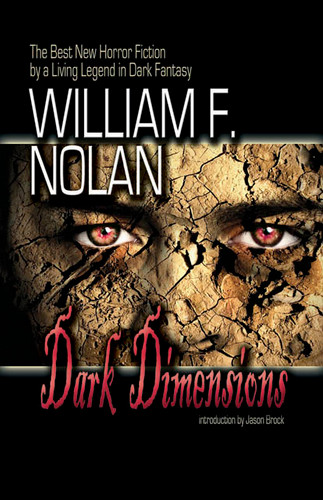 SIGNED - Dark Dimensions by William F. Nolan (OUT OF PRINT)

***SIGNED BY WILLIAM F. NOLAN*** Make sure to fill out the signature options if you want your copy personalized.
Trade Paperback
"Best-known as the coauthor of Logan’s Run, Nolan belongs to a distinct school of California horror writers that includes Richard Matheson, Charles Beaumont, and Dennis Etchison. His slick, easily readable style gets a nice showing in this collection of 15 stories. The centerpiece novella, “Horror at Winchester House,” tours a variety of spooky California landmarks, combining supernatural elements with a hard-boiled detective story about the search for a missing girl. Some pieces are personal and meditative, with autobiographical elements. Others touch on famous characters:  [such as] “The Man Who Stalked Hyde,” which features Robert Louis Stevenson in a surprising way. Nolan writes well about places, and his narrative has considerable drive."  —Publisher's Weekly
"Although William F. Nolan is probably best known, at least at novel length, for his science fiction, a very large percentage of his short fiction falls into the horror genre. This latest collection is drawn from the last ten years, with two exceptions, and includes one original story.  None of the stories have been previously collected and I had only read a couple of them previously.  Nolan’s stories are reminiscent of Charles Beaumont, although they have a distinct flavor of their own in most cases.  I was particularly pleased to find “The Death of Sherlock Holmes,” “Horror at Winchester House,” and “The Man Who Stalked Hyde.”  Nolan has a wry sense of humor at times that occasionally caught me by surprise. There’s a tendency toward psychological rather than physical horror, but that proves to be more effective than not.  A title worth a little searching as I doubt it will have much general circulation."  —Don D'Ammassa, Critical Mass