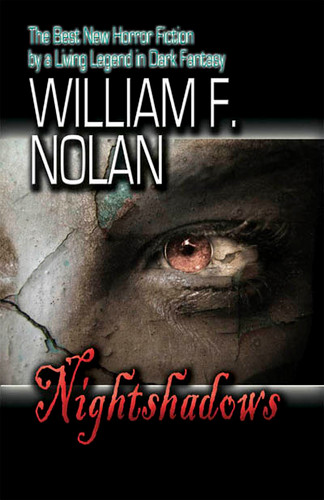 SIGNED - Nightshadows by William F. Nolan (OUT OF PRINT)

***SIGNED BY WILLIAM F. NOLAN*** Make sure to fill out the signature options if you want your copy personalized.
Trade Paperback

"Veteran Nolan (Dark Universe) shows the versatility that earned him a 2005 Living Legend Award from the International Horror Guild in this collection of 23 previously uncollected stories. Most are short, sharp horror shockers that end with an O. Henry–type twist, though several range freely into fantasy and science fiction. Among the best are tales with a crime angle. In “Listening to Billy,” a man finds his frustration with his deteriorating marriage stoked to murderous violence by a fellow bar patron who proves to be something weirdly more than he appears. In “Silk and Fire,” a James M. Cain homage, a private detective finds himself unwittingly played by a double-crossing client. “Ripper!”—an effective exercise in supernatural noir—imagines the horror that might happen were the spirit of Jack the Ripper to accompany London Bridge on its transfer from England to Arizona. Whether writing from the perspective of a love-struck werewolf or a serial killer desperately trying to suppress his violent urges, Nolan shows a command of the short story form that's a tribute to his 50 years of perfecting his craft."   —Publisher's Weekly

"An expert in the art and science of scaring the hell out of people."  —Stephen King

"A master of the short form."   —Dean Koontz

"I am terrified, delighted, and truly moved by Bill Nolan's work."    —Ray Bradbury